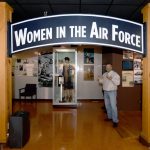 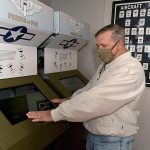 Manchester demonstrates the interactive Friend or Foe exhibit available to guests during a tour at the Airman Heritage Museum at Joint Base San Antonio-Lackland. 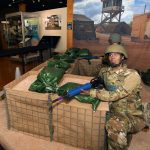 A mannequin of a trainee at the Basic Expeditionary Airman Skills Training, or BEAST, exhibit at the Airman Heritage Museum at Joint Base San Antonio-Lackland. 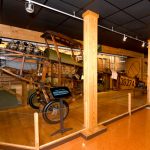 Plexiglass surrounds the Curtiss JN-4 “Jenny” bi-plane exhibit at the Airman Heritage Museum at Joint Base San Antonio-Lackland to provide visitors a better, unobstructed view of the exhibit.

JOINT BASE SAN ANTONIO-LACKLAND, Texas (Feb. 8, 2022) – A number of upgraded and new exhibits are making the history of the Air Force and the experiences of Basic Military Training come to life at the Airman Heritage Museum at Joint Base San Antonio-Lackland.

The museum has made improvements to its Basic Expeditionary Airman Skills Training, or BEAST, and Curtiss JN-4 “Jenny” bi-plane exhibits and has added three more displays recognizing the role of Women in the Air Force, or WAF, and combat cameramen, and an interactive arcade-style game which enables patrons to identify friendly or enemy World War II aircraft.

In addition, exhibit upgrades are being made at the U.S. Air Force Security Forces Exhibits Annex museum. Both the Airman Heritage and the U.S. Air Force Security Forces Exhibit Annex museums are part of the Airman Heritage Training Complex at JBSA-Lackland that consists of indoor and outdoor exhibits and displays of base and Air Force history, including the Air Park.

Bill Manchester, Airman Heritage Training Complex director, said improvements to the exhibits will make the displays more interactive to visitors and bring more realism to the subjects and topics which are covered in the exhibits.

Changes to the BEAST exhibit, which provides an interpretation of field training for basic trainees conducted at the JBSA-Chapman Annex include replacing the wooden railing with a plexiglass divider, installing a contoured texture floor, making it look like the actual ground and field environment at the BEAST site and mannequins of two trainees in fighting positions during training. In the background are wall-sized photos of the BEAST site on a panel, including the inside of a tent with cots lined up in a row and control towers.

Manchester said the updated, more realistic BEAST exhibit gives Basic Military Training, or BMT, graduates the opportunity to tell their visiting families what they experienced during their training in the “Ask Your Airman” section of the museum. The museum regularly hosts families of BMT graduates who come visit after the BMT graduation ceremony.

“We want the young Airman to be able to tell their story to their families,” Manchester said. “Basically, they can say to their families, ‘I lived in a tent, I slept on a cot.’ They can say, ‘just like that, and they can point to the picture (of cots inside the tent). It allows them to tell their story and allows the family to visualize and actually see what their young Airman is talking about.”

The plexiglass installed around both the BEAST and Curtiss JN-4 “Jenny” bi-plane exhibits give visitors a better view of the displays and makes the exhibits more realistic to museum-goers, Manchester said.

Manchester said a new interactive game display, “Friend or Foe,” has become quite popular among museum visitors. The display is set up like a 1980s-style arcade game, complete with two olive drab painted boxes with a touch screen of World War II aircraft flying by.

Players of the video game are a side door gunner on a B-17, a World War II bomber, and have to identify and touch the passing aircraft on the screen as friendly or an enemy.

The gallery on Women in the Air Force is dedicated to the women who served in the Air Force from 1947-76, when they were known as WAFs. The exhibit tells their stories and includes photos and uniform displays.

Manchester said Eagle Scouts from a local Boy Scouts of America troop helped to build the arcades for the “Friend or Foe” game and pedestals for the cameras for the combat cameramen display.

Manchester said through its exhibits and displays, the purpose of both the Airman Heritage and Security Forces Exhibits Annex museums is to recognize the contributions of both Airmen past and present.

“Since 1947, Lackland has been the gateway to the Air Force,” said Manchester, referring to JBSA-Lackland’s origins as the home of Air Force basic training. “Our story is important and we want to tie that rich history of those who came through before us through the gateway of the Air Force to those who are coming through now.”

See the original article at: https://www.jbsa.mil/News/News/Article/2926589/new-exhibits-make-history-come-alive-at-airman-heritage-museum/