Foundation honors Women in the Air Force at Nellis AFB

On September 28th, the Airman Heritage Foundation Outreach Program supported a living history presentation during the Women in the Air Force Association (WAFA) annual reunion luncheon at Nellis Air Force Base, NV. Outreach Manager, Dave Shultz, was on-site to outfit 22 active-duty volunteers to display various WAF uniforms from its inception in 1948 through the late 70’s when the WAF was dissolved, and women were finally integrated into the U.S. Air Force on an equal basis with their male counterparts.

“This is where the rubber meets the road in terms of executing the Foundation’s mission,” Shultz says. “Not one single volunteer was even aware of the WAF or the barriers they broke over their three-decade long struggle to achieve women’s equality in the USAF”.  WAF vet CMSgt (ret.) Bonnie Cooper proclaimed, “We were both the dreamers AND the doers.”  One person who was keenly aware of the history of the WAF was guest speaker Command CMSgt Jodi Snyder, 99th ABW, who delivered a stirring speech recognizing the WAF for their historical accomplishments and thanking them for paving the way so that all female airmen could pursue their aspirations clear of the social injustices that stymied them for years. Her speech combined with the entertaining display of uniforms that followed made the event a monumental success. Maj. (ret.) Sean Habina, President of WAFA, commented, “The program was outstanding and really meant so much to all our veterans there. It was a brilliant way of keeping their legacy alive and enlightening the local active-duty force in attendance accordingly.”

“None of this would’ve been possible without the staunch support of base personnel,” according to Shultz, to include MSgt Sophie Holden of the 99th Comptroller Sq. and MSgt Veronica Montes, NCOIC of the Thunderbirds PA office.  They ensured ample volunteers were available, made all local arrangements and ensured a good overall turnout from the base. “Instead of us watching the Thunderbirds, it was the other way around for once,” Shultz mentioned.

The crowd was reminded although the USAF is celebrating their 75th anniversary this year, the 75th anniversary for women is actually next year, as the WAF stood up nearly a year after the USAF. Originally the USAF was an all-male Air Force until July 1948 when WAF was established. The Air Force Nurse Corps followed suit in 1949.  Next year WAFA will celebrate this milestone occasion in San Antonio, and we all look forward to doing our part to ensure Joint Base San Antonio welcomes them with open arms. 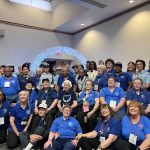 Some of the Women in the Air Force Association luncheon attendees with uniform models in background. Lower center: Sean Habina, President and to her right “Dixie” Odom former President. 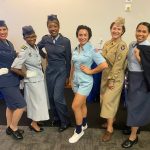 Living History volunteers show off women in the Air Force uniforms from the 40’s-60’s. 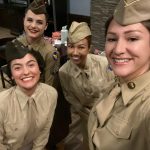 Living history volunteers take a quick selfie showing the earliest Women in the Air Force uniforms carried over from WWII. 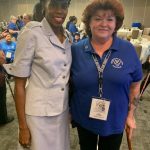 Lt. Col. McKinney in early 50’s WAF “Cords” with a Women in the Air Force veteran. 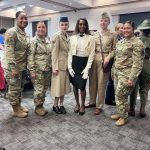 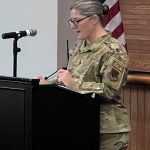 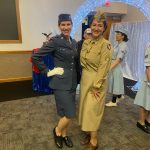 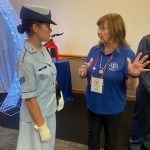 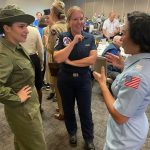